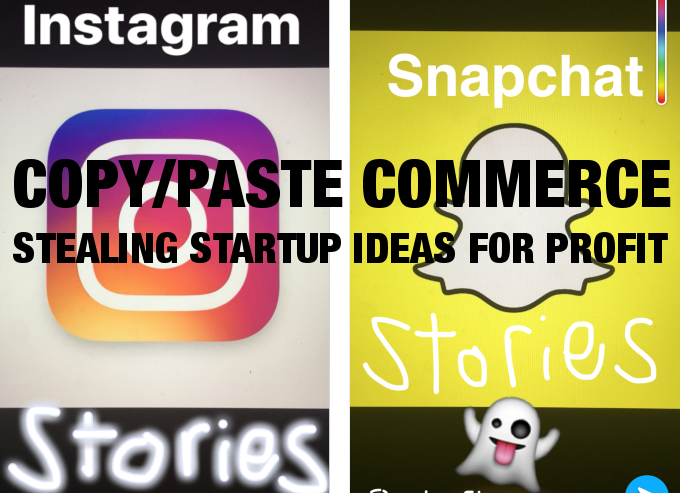 “There’s nothing new under the sun.”

We’ve all heard it… but what then is creativity, what is inspiration? Is it the artist or entrepreneur creating something completely unique, or combining previously separate things in new and innovative ways?

Whoever said creativity was the key to success? The starving artist is a trope for a reason. And while people HATE Zuckerberg for copying Snapchat down to the pixel, was it the wrong choice? Today Instagram’s killing Snap, crushing the market and on pace to outperform/outvalue its parent company in the next few years. They violated the “ethos” of entrepreneurship and made a fortune in the process.

What does that tell us?

“If I have seen further, it is because I have stood on the shoulders of giants.” — Isaac Newton

According to Clay Christensen, there are two types of innovation: disruptive innovation and sustaining innovation, most being sustaining.

Too much disruption is bad for business, peace and stability. Most innovation/creativity is just the logical next step/10% improvement on status quo. Ten percent faster, five percent cheaper, twelve percent lighter… these are the type of features/selling points marketers parade.

AT&T and Verizon both have the fastest LTE, the best coverage, etc…, right?

But then there are the step-function changes, breakthroughs: from PCs to smartphones, DVDs to streaming, the internet…

Some things change everything.

But most don’t. As such, most businesses are built on sustaining innovations or weak USPs (unique selling propositions). You have something proprietary, be it a product, a marketing technique, your branding… and you sell that for all its worth.

All markets are not created equal. What’s innovative/different in the US (like mobile payments and cashierless checkout) is pretty normal in China. And while Amazon‘s one-click easy’, hospitals still fax freaking orders and forget to check the copier…

Looking at the world in that light, isn’t it only ethical/logical to copy creativity to the places that need it most. If the Samwer brothers (Rocket Internet) want to rip off Ebay with German replica Alando or Xiaomi clones iPhones for a more affordable smartphones, is that so bad?

Kickstarter copied Indiegogo and made millions, kicking off the crowdfunding rush in the process. How many small businesses and startups has that birthed?

Competition breeds innovation. It also drives down prices for consumers. And in a world of IP or all-out war, that’s something entrepreneurs need to plan for, especially if they don’t have network effects to build a powerful moat.

But still, it feels dirty, it feels wrong. What crosses the line from healthy competition to something more sinister?

For most, ethical issues arise when the big conquer the small. We root for the underdog because we are the underdog.

So, when Google copies your Chrome extension or Apple adds your app to iOS, your business implodes overnight. That’s what happens when you built on platforms. It’s like playing with fire.

The mark of a true entrepreneur is someone who sees opportunity at every turn. From cancelations and long airport lines which spurred Richard Branson to start his own airline to Slack, a gaming company’s internal chat system because all the existing ones sucked… innovation is often about scratching your own itch or asking why/whatif to the things we take for granted.

Most businesses are built on sustained innovation/tactics. And exporting something (be that a product or a business model) from here to there is a proven strategy for success. From importing fine French wine to the States to startup Cabernet subscriptions to Parisiens, innovation almost always flows both ways as cultures collide.

As an entrepreneur, that’s where opportunity lies: the unfilled gaps. That’s why travel’s such a powerful tool for any founder. Everywhere, people have problems, but often also unique solutions.

Europeans have less space, and thus “grocery” shop more often. Many visit street markets instead of supermarkets while your average Americans eats too much fast food in their car. In Thailand, labor’s plentiful so eating out is often cheaper than cook, and in China, everyone orders delivery via WeChat, the messaging app that runs daily lives.

One world, so many ways to live it.

But each of those examples provides potential crossborder creativity. Space in Europe’s precious so products come in smaller, more eco-friendly packages. Eco-friendly is getting more and more attractive everywhere, as is portion control. And the open air markets are a breath of fresh air (literally) to Americans stressed by the on-the-go culture here.

Street food is popular around the world due to its convenience, low cost (thanks to low overhead and no rent), and is exploding in the western world as food trucks converge.

And Facebook should have bought DoorDash or one of the restaurant delivery companies to create a WeChat-like stranglehold on all things appetite. But that ain’t going to happen now 🙂

The devil’s in the details.

Most of business isn’t big picture but daily grind. And the daily grind is what sets companies apart. It’s the little things, the features and highlights that make you love (or loathe) a product or service.

It’s about getting the little things right.

As a founder, how do you handle that? And what do you do when you see a great idea in action?

A lot of times, you should just copy it!

Ratings: An Airbnb rental with 517 reviews

And so on and so on. Today, every site employs upsells, ratings and reviews are everywhere, and bulk pricing is a business unto itself (Costco rocks!).

Take note of the things that make you take note!

Just because it worked there, doesn’t mean it will work here. The most common problem with founders exporting business models is cultural fit. If you’re not on the ground and instead, observing/brainstorming business from afar, it can be easy to overlook the obvious.

A brewery in Iran would do about as well as Korean Gaegogi restaurant (dog meat) in downtown Detroit. Some things just don’t fly.

Amazon (and ecommerce broadly) are expanding in every country. So too is streaming and content consumption.

People everywhere need to eat, and we’re all a bit lazy at heart. That’s why restaurants and delivery companies work everywhere (though often not very profitably).

There are basic human needs and desires that are universally applicable. Businesses and products that address those are the best kind. And ones that do so in “new and creative” ways (ie, different than its been done before for these consumersin this location) are poised for profit and growth.

When it comes to business, it’s hard to go wrong with the seven deadly sins: Lust, Gluttony, Greed, Sloth, Wrath, Envy and Pride.

And for sins and needs, the more, the merrier. We’re only human after all. That’s why there’s a variation of Tinder or OkCupid in every country on earth 🙂

When it comes to copycat businesses, there are so many reasons to think they’ll succeed. For entrepreneurs evaluating the next Dunkin’ Donuts in Dubai or the Casper of couches (for more on flaws of direct to consumer ecommerce brands/assumptions, see this post), always think about how it could fail first.

What are the assumptions you MUST test before deploying/scaling a startup? It’s easy to get caught in the excitement of a surefire idea and miss the miniature (but catastrophic) landmines along the way.

I once built a RC toys dropshipping site. Big mistake. Turns out, ecommerce threatened hobby stores which were the onboarding ramps to RC hobbyists so the “big” brands wouldn’t allow online sellers. We offered the tier-three toys and never got any traction.

A few conversations with hobby shops and manufacturers would have made that obvious. But entrepreneurs like to move fast and break things.

Sometimes, you run so fast you miss the shatterproof glass and splatter the window of failure.

How quickly and easily can you test your idea? Entrepreneurship is about iteration and shots on goal. The more quality shots you have, the better your chances of success.

So, before you write a line of code, build a site, a brand, a product, etc… talk to people in the space and brainstorm. Get ingrained in the culture, be that doctors in Denver or retailers in Russia.

And if, after subjecting your “idea” to the skeptical scrutiny of time-saving pre-search, it still seems like a good idea, go for it!

Business is about value creation and win-win situations. Whether you’re curing cancer or making Monday night meals easier for moms, you’re adding value to the world. And while not all businesses are created equal (and mission-oriented ones win in the end), there’s nothing wrong with borrowing innovation to build something better.

So, what inspires you? What industries could we all be learning from?

Entrepreneurship is about effective laziness and creativity: accomplishing more while doing less. And if that’s not something to monkey see, monkey do… I don’t know what is.

Like this? Be sure to subscribe below to get my 15 Step Growth Guide to Acquire & Retain Customers and my Free Guide to Crafting Your Killer Pitch Deck!

Post Views: 659
Share
previous
The Most Scalable Marketing Method that Builds Lasting Business Moats
next
Does Your Startup Need Funding? The Pros and Cons of Bootstrapping and Venture Funding