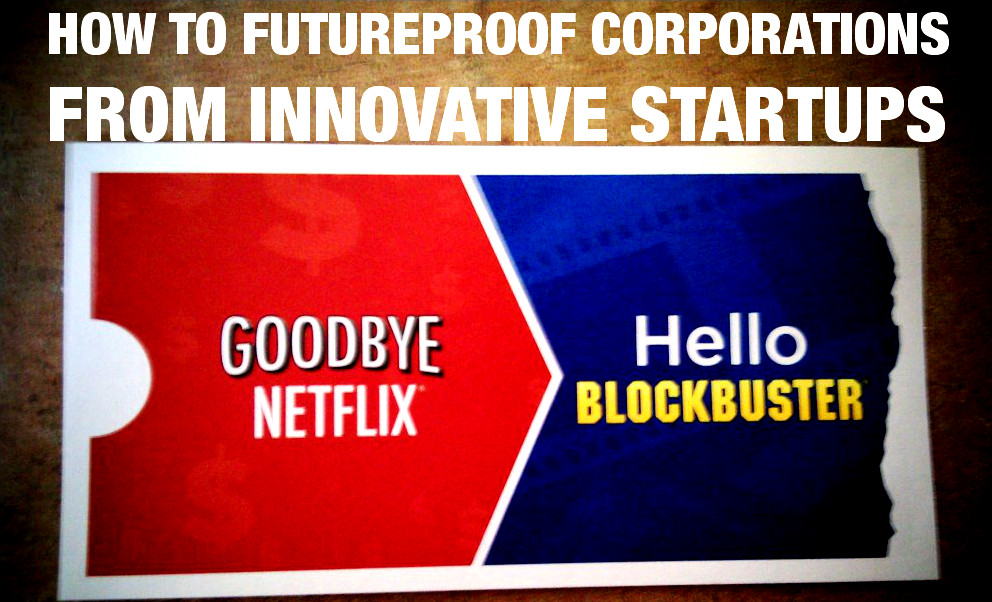 “The battle between every startup and incumbent comes down to whether the startup gets distribution before the incumbent gets innovation.” — Alex Rampell, a16z

The only question, will you win that race? And for Fortune 500 companies with everything on the line, that’s a costly question indeed. Yet so often, incumbents fail to innovate and fall hard.

Worse still, some like Kodak that avoid disruptive innovation, ultimately spelling their demise.

But if you were Kodak, would YOU really cannibalize the 72% of your revenue comes from film? Wall Street would eat you alive.

So, how do you do it? Are all incumbents destined to fall?

Not all companies are worth saving. A business’s obligation (at least according to Milton Friedman) is first and foremost to its shareholders. For an old school business easing into irrelevance, that often means seeking out profits as long as possible, minimizing R&D and overhead, and riding revenues until it comes to a standstill.

But businesses benefit from extending their runway, from transforming into sustainable, future-oriented enterprises and extending profitability (and relevance) a few more years (or decades).

And then there’s the perpetual leaders, the companies that innovate day in and day out, with processes and systems designed for long-term growth.

These are the companies we want to build, the ones employees want to work for.

But how do they do it?

What makes Disney a timeless brand, Apple an unrivaled innovator (at least before Jobs died), Facebook the biggest platform of all time…?

In each case, the incumbent made the hard call. They saw the writing on the wall and pivoted.

Disney’s business is built on content, and ESPN (the cash cow of Disney), built on US cable subscriptions.

As late as Q3 2015, media networks (ie cable subscriptions) accounted for as much as 56% of Disney’s revenue. But TV is dying and cord cutting is rampant.

Disney saw Netflix’s rise as the “innocent” upstart, enticing studios and providers with sweetheart deals to fuel their content flywheel. Years later, Netflix didn’t need them and Reid Hastings had his rebellion… if it wasn’t for Disney and Amazon.

Disney’s rollout of Disney Plus has been incredibly successful (more than 10M subscribers as of mid November 2019, albeit many on free trials). And with franchises like Marvel, Pixar, Star Wars… pretty much anything anyone would want to watch (plus a huge back catalog and constant stream of new content), Disney pulled the perfect coup, cannibalizing cable revenue to dominate the future: ie, streaming.

And Apple… under Steve Jobs they reinvented themselves again and again. PCs to laptops, computer company to iPods, iPads and entertainment. Then the gamechanger, the iPhone, which decimated the iPod market. They were willing to bet the farm and upend the status quo. And it worked.

I’d argue Apple’s recent product stagnation (market cap aside — more on Apple’s future rough here) is due to the loss of that visionary leadership, the burn the boats mentality needed to make a massive pivot.

Then there’s Facebook, who, regardless of their ethics, is killing it. In the early 2000’s, Zuckerberg made a tough call (made possible by his super voting shares and ability to ignore the markets), and doubled down on mobile. Facebook stopped ALL website initiatives, shifting 100% to mobile.

Today, mobile is 96% of Facebook’s traffic and 92%+ of revenue (Statista). At the time though, it was a huge gamble. Social media was still up for grabs…

While startups are quite nimble, they have little to lose. Fortune 500 companies have thousands of employees on the line, all depending on you. The pressure is overwhelming.

And it doesn’t get easier with a startup bearing down your throat.

It comes down to timing, and reading the tea leaves. For most companies, this means properly aligned incentives.

The big problem with corporations: stock bonuses. When employees are incentivized by stock prices, they’re forced to think short term. That’s how Wall Street works. And quarterly returns can’t predict the future, or help you build it.

If anything, it’s like walking into the future while looking backward. How can companies hope to innovate with such lagging indicators of success?

The best company innovations occur outside the company. Between office politics and existing obligations, disruptive innovation is almost impossible within any large organization. The businesses that do it best empower teams outside the traditional change of command — special forces, so to speak.

Move fast and break things. That’s what small teams can do. And when you’re chugging along and things look splendid, that’s the perfect time to start.

“Only the paranoid survive…” and only the innovative thrive.

And if your innovation makes your boss’s job obsolete, it’s probably best if you aren’t sitting next to him. Getting out of the office can be a big plus. WeChat resulted from an offsite QQ team focused on upending desktop messaging to create the next generation of mobile social networking. Today WeChat’s worth $475 billion, has over 1B daily active users and dominates Chinese life.

Imagine being a horse and buggy salesmen the year Ford’s Model T ruined everything.

Wouldn’t you rather go back to streets lined in horse shit?

What about Blockbuster (or movie theaters) as Netflix and streaming ate your lunch? Remember telephone operators? Will we think the same of truck drivers, baristas, accountants, etc… in ten years?

Things change, and that changes everything.

Things are constantly changing. And most corporations struggle to keep up with the competition, let alone plan for a drastically different tomorrow. But they need to. Lasting companies do, that’s what makes them successful. They identify megatrends and build towards them.

Quantum computing, AI, synthetic biology… how do these transformational technologies affect your business, because they will. (To dive deeper into these topics, check out The Disruptors podcast, where I interview the scientists, founders and world-leaders building technology to transform life as we know it.)

Disruption affects everyone, from the upstart to the untouchable. Crackberry was king, until they weren’t, Sears and Toys R’ Us, the top dogs in town…

“A rising tide lifts all boats.”

Where do you place your chips? Blockchain, 3D printing, asteroid mining… every day, scientists and entrepreneurs push the envelope on what is possible. I challenge you to do the same.

What is possible for your company? Which trends (outside of the buzzworthy: “we’re just going add Blockchain to our title” ones) make sense for your business?

There’s a reason Bayer (who had a stellar reputation) acqui-merged with the hated Monsanto: Monsanto’s biotech seed business was miles ahead. Keeping up with the Jones’ at its most costly.

Which upcoming innovations have the ability to disrupt (or kill) your business? What about augment it?

Virtual reality could decimate the market for physical goods, or it could be perfect for Amazon to license/sell hardware IP. Esports could end the NFL, or be a brain-safe way for athletes to compete. Quantum computing could break banking cryptography overnight, or be the greatest competitive advantage the markets have ever seen.

Technology is a double-edged sword, just make sure you’re the one who’s wielding it.

Things can go great, or terribly wrong, it all depends on your company’s outlook and willingness to change.

Foolish is the man who fights the inevitable march of progress.

Which technologies present the biggest threat to your business? Why?

Analyze the following trends and construct best and worst case scenarios for each. Venture into the absurd. Change is never linear or obvious.

There’s a reason sci-fi is so prescient yet unexpected: it pushes progress towards exciting and unexpected conclusions. That’s the way the world works, and the well-paid business experts ALWAYS get it wrong. In 1980, McKinsey predicted there’d be 900,000 cell phones in the US by 2000. Turns out, there were 109M…

What’s the future of your organization? Will you be around in ten years, twenty? Are you ready?

If you’re not, I help organizations prepare for upcoming shifts and long-term, sustainable growth.

Post Views: 404
Share
previous
Does Your Startup Need Funding? The Pros and Cons of Bootstrapping and Venture Funding
next
Do Things That F*cking Scale: An Entrepreneurs Guide to Scalable Business Growth