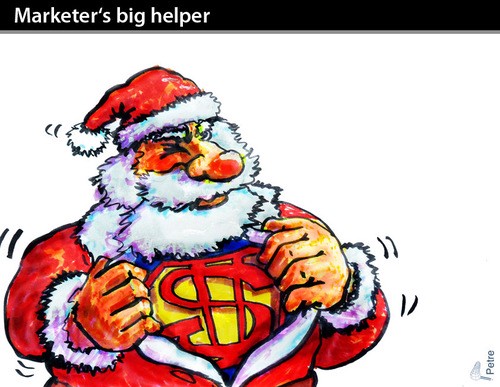 “It’s beginning to look a lot like Christmas, toys in every store…”

And the pretty sight businesses see, is the green that will be, pouring through their doors…

Christmas is a myth. What was once about religion (first paganism and later repurposed for Christianity), has been converted to capitalism. Toys and gifts are the currency of the day.

As of 2016, Deloitte’s Holiday study predicted US holiday sales to top $1 trillion. Yes, that is trillion — with a T.

And the average American household plans to spend a whopping $419 on presents, up 8% from the year prior.

I think it is fair to say the USA is hooked on Christmas.

But Christmas, like Black Friday is a marketing ploy. There is no real reason to give gifts to others, it is just what everyone else does. It is expected of you. Family, friends, kids, cousins… everybody gets a gift, right?

Brainwashing is a business

So how did Christmas hook its claws into the collective pocket book. What led to this rise of consumerism?

There are religious theories of course. These relate to Jesus’ birth and the three magi bringing him gifts of gold, frankincense and myrrh.

According to sources however, in Ancient Rome gift giving was a pagan custom for winter solstice. It is easy to see how Christians/Christmas kept this tradition going.

But a gift is different than a mountain of presents. How did we get here? And more importantly, how can startups engineer this same level of fanatical market creation to build billion dollar businesses?

Between Hollywood’s extravagance and corporations using Santa to pimp their products, Christmas has become more and more a driving force for the economy. The holidays make or break many merchants.

Xmas is a network effect

So between feeling good, having an excuse to buy things and wanting to avoid the discomfort of not giving another a gift, Christmas has reinforcement mechanisms on all sides.

Is it so hard to see how today’s buildup happened?

In an ING.com survey, 70% of participants said too much emphasis was placed on spending, 42% felt forced to spend more money and 10% even borrowed money, just to pay for Christmas…

Sounds like some of the same destructive and unescapable pressures as social media.

But Christmas is far from being the only great example of market creation. In this scenario, as with Black Friday, the collective market created the demand. Between advertisements, others and damned good deals, both jointly engineered incredible sales numbers.

[LIKE THIS ARTICLE SO FAR? THEN YOU’LL REALLY WANT TO SIGN UP FOR MY NEWSLETTER OVER HERE — AND GET SOME FREE BONUSES!]

But diamonds are forever

On the startup side of things, it is often more valuable to look at the smaller scale examples. And what better story than that of De Beers — the diamond company that made beautiful diamond engagement rings a thing.

In the 19th century, the discovery of diamonds in South Africa’s many mines led to a flooding of the market, driving the price of these precious stones down. British businessmen recognized the enormous opportunity, and created De Beers in 1888 to capitalize. Recognizing laws of supply and demand, De Beers created cartel like control of supply.

Then, around 1938 the Depression was in full swing and diamond prices were again falling. The company recruited a NY ad agency to engineer demand.

“The folks at Ayer set out to persuade young men that diamonds (and only diamonds) were synonymous with romance, and that the measure of a man’s love (and even his personal and professional success) was directly proportional to the size and quality of the diamond he purchased. Young women, in turn, had to be convinced that courtship concluded, invariably, in a diamond.” — Uri Friedman, The Atlantic

Then, with control of the supply, they began their campaign, giving diamond rings to models and movie stars for photoshoots and newspaper articles, always being sure to cite the size and cut of the diamonds in the article.

And then it was high schools. They arranged lecturers to visit schools around America, educating on the importance of diamond engagement rings.

Sound absurd yet? It was. But society let it happen, and slowly but surely diamond fever started to pick up.

But the “A Diamond is Forever” advertising campaign in the late 40s slammed it home. The image of an eternal, beautiful diamond as the metaphor to marriage was complete. And of course no engagement or marriage could last a lifetime without a diamond ring.

The damage was done.

A hook and handcuffs

The best network effects are nearly impossible to break and are built around two primary mechanisms: the hook and the handcuffs (for a detailed analysis of the 5 types of network effects and how to hack them, see this post).

How do you acquire users and how do you lock them in? Those are the two questions founders face. And they are equally important.

In the case of Christmas, the hook and handcuff are one in the same. After receiving a gift, you are hooked into reciprocating. And for every gift you give, the handcuffs keep you giving year after year.

Most network effects are not so multi-faceted as gift giving or diamond rings. In social media for example, the hook is an invite. After joining, messaging and interacting with friends, you are handcuffed in.

Leaving the network means losing connectedness with friends. And probably a bunch of your photos as well. You are stuck playing the game…

The same is true of any marketplace. Sellers join Amazon to acquire customers quickly, and it works. The access to consumers is the hook.

But sellers cannot leave. After building up their business to accomodate Amazon-like sales numbers, they cannot suddenly leave. They have too much inventory built up and too much riding on their ability to sell it off. Sellers are handcuffed to Amazon, even as Amazon brutally murders their business (for more on how Amazon is killing ecommerce, see this post).

(Many of the same strategies apply here as SaaS startups. See this in-depth guide on strategies for acquiring and retaining of users)

My wife is Swiss. I’m American. We have both traveled the world extensively.

One of the hardest network effects to escape is home. Home is where your heart is. Your friends, family and loved ones… all in one area. Want to move abroad? Are you willing to sacrifice that close connection?

The unfortunate fact is, we are creatures of inertia. The majority keep doing what they are doing, never leaving, never changing. You are born somewhere, you die somewhere. What you do in between determines the course of your life.

If you are reading this article, you are probably part of the 20% that does things differently. But still, is Amsterdam awesome enough to lose your family for? Is Japan exciting enough to leave behind your friends?

Inaction as a decision

The problem with people is they often make your decisions for you — their inaction forces inaction on your part.

Ever tried to lose weight? When your friends and family are a bit chunky, many subsciously seek to sabotage you. Other don’t like it when we change (and they don’t).

Opting out of network effects requires force of will. It requires a burn the boats type mindset, giving up the gains the network provides for a whole new set of opportunities.

As an entrepreneur it is incredibly important to remember this. 80% of people won’t escape the Matrix. If you build sufficiently strong network effects, the majority will never leave. As a business, that is awesome.

But it is also scary. Look at social media. Many are addicted to the dopamine high. And companies have learned to gamify us, turning a thinking, reasoning person into little more than an animal.

I don’t know. You need to answer that question for yourself.

What are you building? How can hack the world to succeed? What network effects and internal mechanisms mean the difference between a burnout and a billion-dollar business?

These are the questions you should be asking yourself.

Have thoughts on the article and the subtle art of manufacturing a market? Would love to hear opinions, insights and other examples in the comments section below.

Post Views: 387
Share
previous
Consumer Hardware’s Hard So Apple Slowed Down Your iPhone
next
Don’t Mine for Business Gold When You Can Sell Startup Shovels