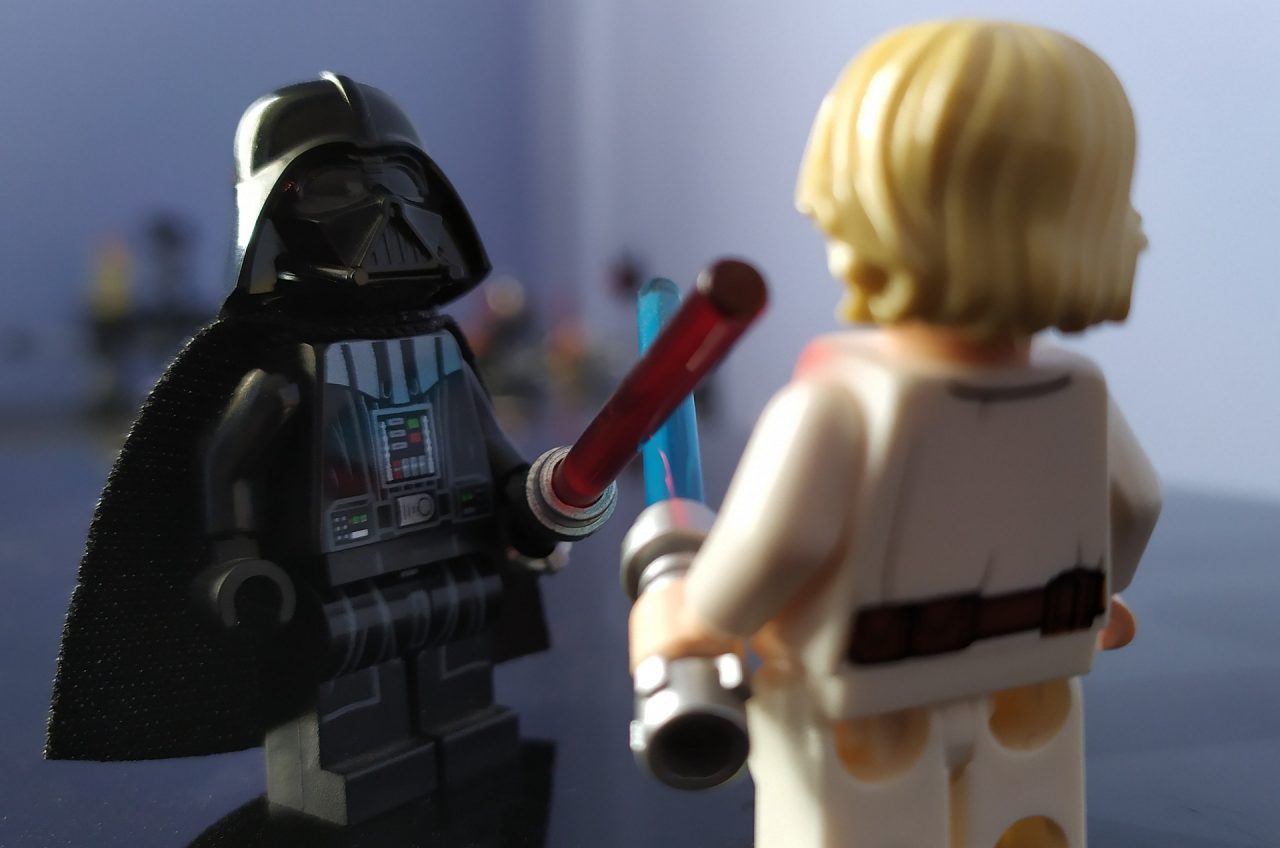 I was recently advising a client in an incredibly competitive industry – think hundreds of millions raised, huge players in every major market, multi-billion dollar valuations…

Suffice it to say, it’s a pretty crowded space they’re trying to break into.

To make matters worse, they weren’t all that differentiated… their USP was weak.

My biggest problem with what they were doing was that they had different two business models: one identical (but cheaper) than the market leaders and one based on recurring revenue subscriptions.

In order to protect the identity of the client, let’s pretend this was 2006 and they were building an ecommerce marketplace that charged sellers 5% instead of Amazon’s whopping 15%+.

I told them flat out their two-tiered system wouldn’t work. How could they pitch the product?

What kind of pitch is that? Sure, it sounds great in theory but falls apart in practice.

Because first of all, you don’t have customers. And even though as a retailer I’d have loved to pocket an additional 10% on every sale, Amazon already had ten million times as many customers, making your little upstart (let’s call it Shopify) barely a drop in the bucket.

But what if you overcame all the odds. You raised money, built your platform and user base and started doing real volume on the platform… then what? What prevents another scrappy startup from raising twice as much or charging 4% commissions? Or 3%, or 0.3%…? Nothing.

That is what we call a race to the bottom and it has plagued Uber and ridesharing services to this day. 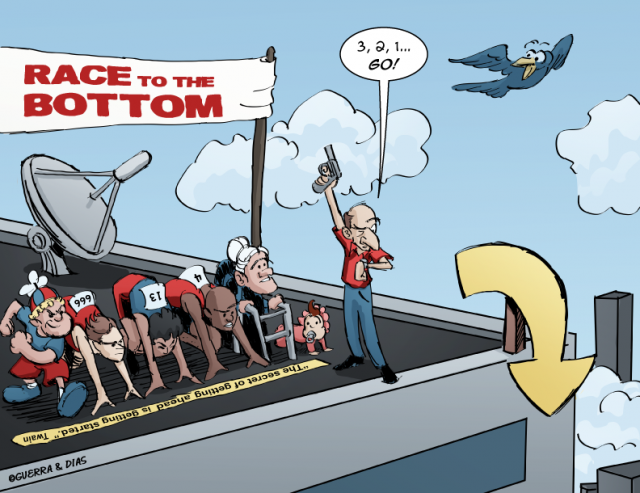 The problem is, people want the best offer and have no sense of loyalty to commoditized services like ridesharing, food delivery, internet hosting etc…

When was the last time you bought toilet paper because of a specific brand?

The truth is, your margin IS NOT my opportunity, not unless you’re Jeff Bezos and Amazon and have more money than god.

That means you need to differentiate another way. That means, when everyone else goes left, you need to go right.

That is where your brand’s archenemy comes in.

I have two questions for you:

For the purposes of our example, let’s say our founder was an ex-Amazon merchant (like me – for more on my story, see Why My Biggest Business Success was also My Biggest Failure) that was infuriated at how Amazon’s Everything Store and other large ecommerce marketplaces screwed over 3rd party sellers and stole most of their margins.

To Amazon, my 7-figure ecommerce brand was just a rounding error in the grand scheme of their $469.8B total turnover (2021). I was playing on their “playground,” paying a fortune in fees for the privilege and could be booted at any time.

That is the antithesis of commerce.

The problem was, I had no choice but to participate. It was either that or miss out on the 50% of the ecommerce market that Amazon commanded.

It was the only real game in town.

Until Shopify came around.

But imagine if Shopify had had two business models instead of one:

Either set up your store and sell on our platform and we’ll only take 5% commissions.

It would have made it a little tough to tell your friends about Shopify. What could you say?

“It’s this site where you can sell stuff online.”

My brain automatically goes to: “You mean Amazon?”

And the conversation (and my interest) would have died right there. It’s like choosing between white and off-white shoes…? I don’t really see the difference…

That’s why, instead of building yet another ecommerce platform and charging incrementally lower fees, you need to stand out. The question is: how? How do you build something sustainable, successful and lasting?

The answer: you attack the status quo and the corrupt system you’re trying to replace.

Because Amazon is Shopify’s archnemesis. They have completely contradictory views of the world and the future of ecommerce.

With Amazon, everything is cheap, commoditized, anonymized and owned by Bezos – hence the shift to Amazon Basics products and their increasing regulatory scrutiny.

Contract that with Shopify where everything is original, brand name and beautiful.

We call that polar opposites.

And the fact that they are polar opposites is the ONLY thing that’s allowed Shopify to thrive. Shopify has a completely different value proposition for brands – total control, total flexibility, direct connection with their customers.

Amazon offers none of that.

And Shopify has repeatedly attacked the faceless corporate behemoth and their commoditized view of the world and used it in Shopify’s sales and marketing material to attract increasingly more brands to the platform.

It is a battle of good vs evil.

Fighting the Dark Side with Light

“Don’t sell on Amazon. They’ll commoditize your business, copy your products, crush your margins and keep your customers…”

That’s great marketing made all the better by the fact that it is true – it happens every day to online sellers.

Hence why it’s such a powerful battle cry.

There’s the Dark Side/Evil Empire… and then there is Shopify, the rebels, the white knights…

Which side do you want to play for?

Which side do you trust for the future of your business?

The (Other) Business Model as a Moat

But being different is a lot more than just branding.

Perhaps the best part actually (if you do it right) is that Amazon (or whichever juggernaut you attack) can’t just copy you or gobble up your business without cannibalizing itself (sorry Zuck 🙂.

And the beautiful thing is, this applies in almost every industry. Generally speaking, there’s a standard way of making money that everyone follows

But what if you flip it on its head.

Instead of selling products, what about renting them?

Instead of debit card transaction fees, what about free payments and investing the deposits?

Instead of insurance and doctor copays, what about a flat-rate retainer?

By thinking differently and making that the core of your company, i.e. zigging and when everyone else zags, you instantly stand out from the crowd.

Now, let’s zoom back out. Sure, perhaps in this example it’s perfectly easy to see, but what about in your business. How do you define your anti brand? How do you position yourself on the side of righteous justice and use that as your wedge to attack the market? How do you build your moat and insulate yourself from a full-on assault or acquisition by the market leader?

How about some examples:

The auto industry was incredibly pollutive and stubborn about EVs… until Tesla. 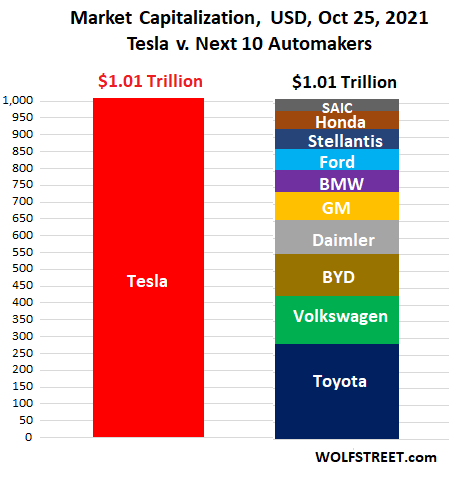 The hotel industry was incredibly expensive and undifferentiated… until AirBnB.

American coffee was grab-and-go, watery and brewed 2 hours ago… until Starbucks.

Chauffeurs were ultra expensive and premium… until Uber.

Because every spectrum has two sides, this creates incredible business opportunities, especially as most are top heavy to one side or another. There’s your “standard way” of doing business and then there is everything else.

My question for you is: how far can you go to the other end of the spectrum to make your name and take your stand?

Anti branding goes on and on:

Brave is the anti surveillance browser.

Apple is the anti tracking smartphone.

Slack is the anti email communication.

Define your devil and destroy it.

So, who or what are you fighting against? Who is your “Evil Empire” that you must defeat?

Whatever your war, wage it to its extreme. Don’t settle for half-assed approaches or appeal-to-both-sides business models.

Only by betting the farm, burning the boats and going all-in on your mission will you ever amass your forces, destroy your competition and achieve something truly meaningful in the world.

And when it comes to commodities, no one could care less.

So go change the world.

Want help figuring out this and other marketing and growth hacks to boost your business and your bottomline? Schedule for your free strategy session today.

Post Views: 579
Share
previous
How to Build Your Startup's Roadmap: From Idea to IPO and Beyond!
next
The Pros and Cons of Investing via an Angel Syndicate / SPV