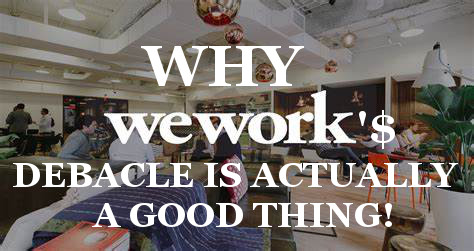 If it ain’t broke, don’t fix it. That’s how the old mantra goes. And when it comes to human nature, that’s exactly how we work. We avoid change and go with the flow. If it hasn’t killed us yet (from an evolutionary sense), we’re probably on the right path.

And that’s why the WeWork saga is a good thing, at least for venture.

The canary in the coal mine

Venture’s been frothy for years. We’re 10+ years into a bull market, everything on the rise. Startup valuations are at an all-time high and there are unicorns enough to fill every public zoo. Things are rosy and right as rain, right?

But then there’s WeWork… Is Adam Neumann’s company an outlier or an indicator of something more fundamental? How did that shit show of a startup come two steps from hitting the NY Stock Exchange?

And how did they raise BILLIONS from private investors with a founder holding a (for lack of a better term) dead man’s switch, making the company impossible to wrest from himself, his kids, grandkids or anyone who happened to be born into the Neumann dynasty reminiscent of Imperial China?

Who thought that was a good idea? And selling the “We” trademark to the company for millions. And taking a $700M “loan” against his ownership stake. Oh yeah, and the jet…

But are WeWork and Adam Neumann an outlier, or a sign of things to come… that’s the question.

SoftBank: injecting too much steroids

“Money ain’t everything, not having it is.”

That’s what founders MUST grapple with when considering an investment from the $100B Japanese megafund. Either they invest in you, or pour billions into your competitor… it’s your choice. It’s a bit akin to Facebook’s unofficial mantra: “Join us, or we will copy you…” (more on that here.)

If nothing else, it sounds monopolistic and anti-competitive.

And from an even worse sense, it seems ineffective and wasteful, like paying employees by the hour instead of for performance/results. “Did it really take you five hours to fill that cup of coffee…”

By pouring money at problems, SoftBank (and venture capital as a whole — more than any other point since 2000) created an artificial system built around growth at all costs — including the prospect of profit!

What is a business that never becomes profitable (besides Uber that is…)?

Is growth at all costs really the model we ought to be emulating?

Any business (even the broken ones) looks better with lipstick. And like a skewered pig over a roaring flame, WeWork had all the trappings. Nice offices, great coffee, FREE BEER… What wasn’t to love?

And investors saw the brand everywhere. Good luck finding a mainstream city that didn’t boast at least one of the high-end office buildings (I mean co-working spaces, I mean innovation hubs, I mean centers of consciousness and enlightenment…)

You get my point.

And WeWork was a pretty cool place to work. People loved it. It even got startups and solopreneurs out of Starbucks and/or their parents’ basements to showcase their flashy work ethic. But the prices were unsustainably high. And everyone knows we’re living in an inflated bull market: real estate prices higher than 2008, Fed policies to spur the economy and record levels of everything from unemployment to propaganda….

What happens when that hamster wheel slows? What happens to the small businesses and freelancers unable to pay WeWork’s exorbitant membership fees (ie: rents)?

With their long term leases, WeWork was a disaster waiting to happen.

But you’ve heard all that.

Survival of the leanest

In 2019, life is easy. There is a McDonalds and cheap calories on every corner and Facebook on every phone. And as such, obesity and depression are on the rise and running rampant… Where is the struggle to survive? It certainly isn’t here…

And when you live in a world of abundance where car accidents, suicides and overdoses are some of the leading causes of death, you’re looking at a population ill-suited to actual catastrophe.

Toughness is like a muscle (as is fiscal responsibility): Use it, or lose it…

Many of today’s startups (and founders) have been raised with a silver spoon. They don’t remember the dotcom crash, the Great Depression or any of the economic bubble burstings of humanity’s past.

But what goes up must come down. And the first signs are usually opulence. Like Rome’s ridiculous Games to cover up bread shortages, are WeWork’s employee camps and Silicon Valley’s kombucha kick perks the first signs of Caesar levels of excess?

When a founder can own 75% of a company after having raised $6B+ (with $18 in lease obligations as of 2018) with 65% voting control and dynastic succession, maybe we’ve gone too far on the fun train. Maybe it’s time to get back to the basics: money in and money out.

And this isn’t limited to WeWork (which is less of a Theranos story and more of a systemic inevitability, like Trump). Uber’s gotten killed since going public— (Like this? Be sure to subscribe below to get my 15 Step Growth Guide to Acquire & Retain Customers and my Free Guide to Crafting Your Killer Pitch Deck!) and more unprofitable companies are going public today than ever before.

For some companies where scale and decreasing marginal costs drive profits, that’s okay. But for oversaturated, highly competitive businesses like Blue Apron, that’s a disaster waiting to happen.

I’ll sell you fifty cents for a dollar all day…

Investors screwing over each other

There’s one thing we haven’t talked about yet, why this is so problematic.

Thing is, private market investors (angels, VCs etc…) usually come out okay. They invest in the delivery company that never makes money and push the founder to scale quickly. Those “growth metrics” (often driven by excessive Facebook or Google ads) create the hockey stick numbers that gets the next VC to invest, and so on and so on as the company’s valuation (and subsequent raises) rise.

This is great for investors. They can mark up their investments (showing unrealized paper returns), and use this to raise their next fund. And VCs are ALWAYS raising, every 2–4 years. The more money they have under management, the sweeter their 2% fees look. (More on the dynamics of VC funding/incentives here).

That’s a MAJOR misalignment. Investors want growth, founders want value. But because there are so many folks looking for funding (and somewhat limited funds/investors), there is a power mismatch prevalent in all supply and demand. Plus face it, bigger rounds and valuations sound sexier. That’s who TechCrunch and Mashable cover, right?

So, we have all the incentives in place to grow grow grow, but none of the need to focus on the numbers. Until recently, profitability rarely factored into the equation.

And that leads down a slippery slope to the public markets.

We talked about VCs’ 2% management fees. And while these are notorious and part of the problem, the other (probably bigger) issue is carry. Venture firms MUST pay their LPs (limited partners, ie, investors) back on the 10–12 year time horizon of the fund.

Well, if XYZ Ventures invested $100M into ABC Unicorn, the only way they’re getting their money back is an acquisition or an IPO… They NEED their shares to get liquid within 10–12 years to pay back their LPs.

And while we’re living in the world of Facebook and Google acquisitions to avoid competition (more on that here), the end game is always an IPO. Every founder wants to ring that bell.

But in the case of Uber, Lyft, WeWork and the many many other unprofitable companies going public (and outperforming the profitable companies once they do…), who is the sucker left holding the bag once trading starts… it’s the general public — generally with no idea about ROIs, realistic multiples or why they should/shouldn’t invest in an index fund.

You see where this is going.

Sounds a little Ponzi scheme-ish to me… you just gotta find a bigger sucker.

So why is WeWork’s crash a good thing?

The biggest loser in the whole WeWork debacle (at least so far) is SoftBank. They invested BILLIONS in WeWork and had to spend billions more to buy/“bailout” the company after their IPO went from a $47B valuation to dead in the water.

They did it to save face, and to save their paper returns on a fund that’s essentially underwater given their huge holdings in Uber (also excessively overvalued when they invested).

Luckily, public market investors avoided the black hole of a business investment. So, it’s just WeWork’s employees (of whom Adam Neumann royally screwed) and the large private investors who got shat on.

More importantly, it’s forcing us to have a hard look at both founder control and funding incentives around early-stage venture. Unit economics and basic fundamentals are making a comeback.

But it won’t matter, at least not yet. We’re still in for a crash and well along the way to a bottom-out… WeWork’s just the next in a series of dominoes to fall.

Hopefully, we learn from our painful mistakes because, while history doesn’t repeat itself, it often rhymes.

So, I ask you again: Is WeWork is an outlier or symptom of a more fundamental problem with a venture industry flush with cash?

The problem is, more money is funneled every day into the markets (and into startup investing) than ever.

Everyone from sovereign wealth funds to successfully exited founders wants in on the action. And soon, thousands of new millionaire early-employees at companies like Airbnb, Uber, Pinterest…

And where else is the upside truly uncapped?

Let’s face it, startup investing is sexy. No one brags about being a real estate guy or being long on gold. But, being the first into Uber or Airbnb…

What do you think: Is WeWork’s collapse a good thing? Is it a sign of things to come? Or, as is often the case with unpleasant experiences, will the next dopamine hit erase the important lesson? Only time will tell.

Learned something? Click the share buttons on the side to say “thanks!” and help others find this article.